Waar gaat All the Stars and Teeth over? 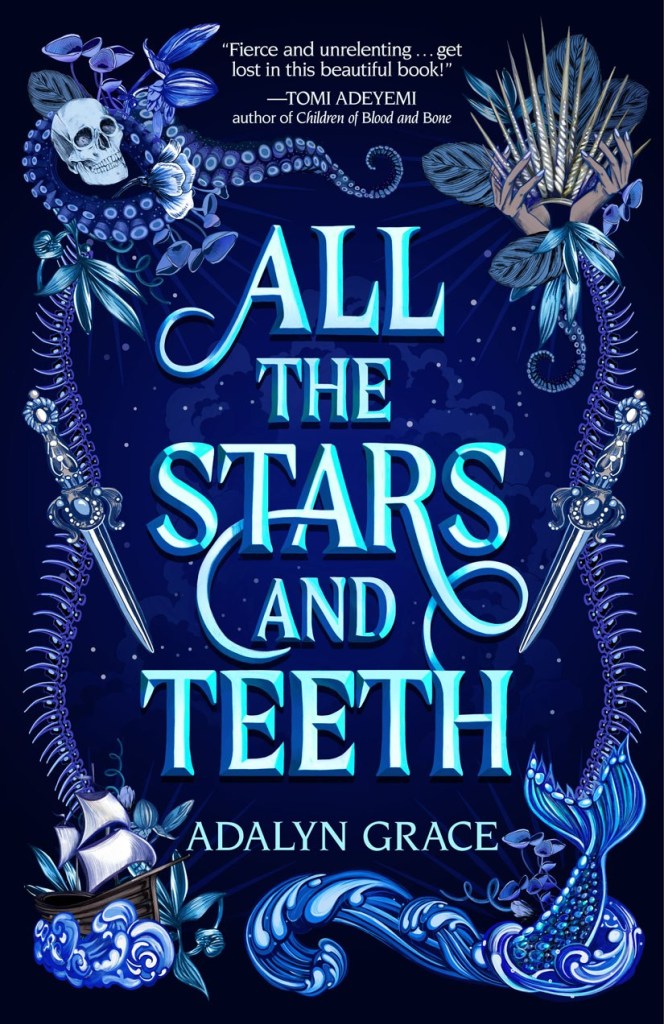 This day is made for sailing.

The ocean’s brine coats my tongue and I savor its grit. Late summer’s heat has beaten the sea into submission; it barely sways as I stand against the starboard ledge.

Turquoise water stretches into the distance, stuffed full of blue tangs and schools of yellowtail snapper that flounder away from our ship and conceal themselves beneath thin layers of sea foam. Through the morning haze sits an outline of cloud-shrouded mountains that shape the kingdom’s northernmost island, Mornute. It’s one of the six islands I’ve not yet seen but will one day rule.

“Where are we headed?” I ask. “To the volcanos of Valuka? The forests of Suntosu?” The weather is gentle enough that my words carry to the bow where Father stands, overlooking the water.

Years at sea have wrinkled his tanned olive skin, making him appear older than his forty years. The wrinkles also make him look stern, which I like. Arida’s High Animancer, the King of Visidia, should always appear stern.

“The sea is a dangerous beast, Amora,” he says. “And you are too precious to lose. But prove your strength to our people tonight, and I’ll know you’re capable of braving it. For now, focus on earning the throne.” His deep brown eyes flicker to me, and he grins. “And on announcing your engagement.”

My throat thickens. Ferrick is a fine enough man, if one dreams of settling down with a childhood acquaintance. But I prefer my daily suitors, and their gifts.

Amabons, ginnada, and dresses from the finest fabrics, all to woo the impressionable princess they believe I am. Boys in the kingdom think they can buy my love and title, and I let them believe it. Nothing can compare to the lavish trinkets of hungry suitors, and I’m not keen on ending their generosity.

“Are you ready?” Father’s words are low but firm; something in his eyes shifts. He’s not talking about my impending engagement.

Instinctively, my hand goes to the leather satchel resting on my hip. The contents inside clatter as I touch their rigid edges.

“I am,” I say, though the words are bolder than I feel. Because even as the king’s only child, my people will not simply hand me the crown and let me lead out of birthright. Here, in the kingdom of Visidia, I must first prove myself to them if I’m to earn the title of heir. And I’m to do it by showing them a proper demonstration of Aridian magic; the magic shared only through the blood of the Montara family.

Tonight, I’ve only one chance to prove I’m fit to claim the title of Animancer—a master of souls. But my people won’t settle for a good performance. They demand excellence, and I’ll give them just that. By the end of the night, I’ll prove to them there will never be anyone better suited for the throne.

Sprawling mountains of ripe green and lush cliffsides stretch before us as the sea tugs our ship toward the docks of Arida, my home island. The cliffsides are thickly shrouded with bioluminescent flora, which, while beautiful in the daylight, will steal a person’s breath when they spread their brilliant purple and pink petals beneath the moon.

It’s beautiful, yet a thick knot of bitterness constricts my chest as we approach. I try to ignore it, but it sinks into my gut like an anchor.

I love Arida, but gods, what I wouldn’t give to turn this ship around and keep sailing.

Our sails bloat as wind hauls us toward the harbor, and Father readies himself to dock. I may be expected to run the kingdom one day, yet Father still refuses to teach me something as simple as sailing The Duchess. As I’m one of only two potential Montara heirs, he tells me travel is too dangerous. Despite my years spent begging, arguing that I should be able to sail and see my kingdom, he hardly lets me touch the helm.

But that just means it’s time to try harder. Today is my birthday, after all.

I shoo my worries away with the seagulls that circle the main mast and join him. Father’s lips pucker as I smile; he knows exactly what I want.

“Please?” I rest my smooth hand beside his rough one on the helm, craving the sun-kissed glow and sea-roughened callouses he wears with pride—the telltale signs of a voyager.

There’s not much time left before we dock. The waters are growing shallow, beating angrily against the ship as we near Arida. A small crowd of servants and royal soldiers wait for us on the red sand, ready to whisk us away in preparation for tonight.

“No.” Father squares his shoulders to block me out.

I duck around him to claim his stare. “Yes. Just this once?”

Father’s sigh makes his broad chest quiver. He must sense how badly I want this, because for the first time in my life he steps aside and offers me the helm. My free hand grips the smooth wood without missing a second, and I suppress a shudder at how it feels between my palms.

“You must go slowly,” Father says, but I’m only half listening. The ship feels every bit the beast I wanted it to, able to take on the sea’s promise of adventure and conquer anything in its path. It’s strong, fearless, but I sense its reluctance to listen to me. This ship is like my people; it demands only the most deserving captain, and will accept no less.

I scrape my nail gently against the wood and twist the helm, just an inch. The ship shudders in response, considering me. Father lingers close, his hands twitchy and ready to take over should something go awry. I won’t let it.

I am Amora Montara, Princess of Visidia and heir to the High Animancer’s throne. There is no ship I cannot sail. There is nothing I cannot master.

The wind shifts with a gust of air, disturbing the sails and pushing the vessel an inch or so to the left. It’s not a big shift, but the ship is challenging me, and I’m not one to lose. I adjust my grip on the helm to correct it.

I don’t need to look up to know we’re coming into shallow water. I can feel it in the ship’s behavior, in the way its steady back-and-forth lulling stiffens into something rigid and fierce.

“Tighten the grip of your left hand.” Father’s voice is distant, but I do as he says. The ship creaks in response.

I am Amora Montara. I dig my nail into The Duchess again when the ship quivers. The power of Arida is within me. You will obey.

The Duchess groans as we hit the sand, and the impact rattles my chest. I lose my footing and scramble to get a better grip, but the helm is slippery from the ocean’s mist, and my face slams into it. Jagged wood scuffs my cheek, causing the ship to laugh as it settles into the sand. I pull back, running a finger along my skin. It comes away dripping blood.

The ship has won, and she knows it. I can’t remember the last time anything made me bleed.

“Amora!” Father’s voice cracks in horror. Anger swells in my belly as I glare at the hands that have betrayed me.

Blasted ship. All it had to do was listen.

Tonight, I must be perfect. There’s no room for ugly injuries that signal weakness.

I take Father’s arm before he can say anything else.

We descend the bridge of The Duchess, to where Mira waits upon sand the color of fresh blood, standing between several rigid men and women who sport light blazers with rose-gold trim. She wears loose black trousers and a matching top that billows from her small frame, fastened by tiny pearl shoulder straps that shimmer beneath her hair—a thick stream of waves as dark and sleek as a raven’s feather. The solid rose-gold trim along her outfit matches the royal emblem she wears proudly on her chest; it’s the same as the others wear—the skeleton of an eel wrapped around a crown of whalebone.

Though she’s hardly older than myself, Mira’s sharp face is prematurely wrinkled from constant anxiety. In her five years as my lady-in-waiting, she’s taken every moment possible to fuss over me, as protective as my parents. When she catches sight of my cheek, she gasps and draws me forward.

“Today of all days.” She fishes a handkerchief from her pocket and rubs it across my cheek. Fierce disapproval lingers in the back of her squinted blue eyes, and as I await the verdict, she frowns. “The wound’s fresh, so we may be able to conceal it if we act quickly. Come, let’s get you ready.”

I glance back at Father, seeking his smile of encouragement. But it withers into a frown as the officials draw him in, whispering secrets not meant for unproven successors. I take a step toward him, silently begging him to turn and seek my counsel or invite me into the discussion, but Mira grabs hold of my hand.

“You know they won’t tell you anything.” Though her voice is soft, the words feel like claws. “Not until after your performance.”

I shake Mira’s hand away, letting the ship steal my attention. Its wood creaks with laughter as it settles onto the sand, mocking me.

The sound sinks into my bones, and I wonder: if I cannot rule one ship, then how am I ready to rule an entire kingdom?

Ga jij All the Stars and Teeth lezen?