Because I am actually in a scene today, I have to show up early for costume, makeup and hair. I pass Robbie on the way to set - most parts of sets are unglamorous, back alleys and loading docks and that sort of thing.

I get a trailer of my own!, bonus of which means SIDEBURNS GUY has to bring me tea. We discuss his sudden fame. 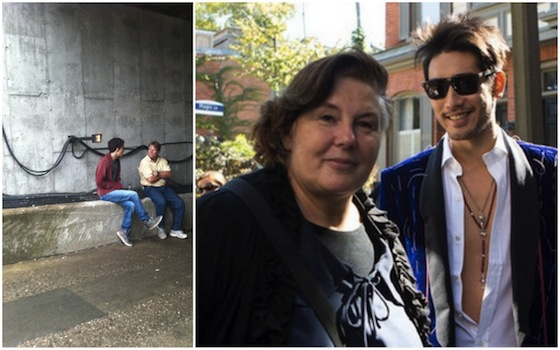 I am informed, going to be some sort of cat demon in a business suit. Maybe running a cat demon empire. I am not totally clear on it, but I do know I have a great selection of AMAZING SHOES to choose from. Everyone who knows me knows I am obsessed with shoes, so this is the greatest day of my life. I finally pick a pair that are black and sparkly.

After that, I get ushered into hair and makeup. Someone has pasted something hilarious but profane to the mirror; they tell me it was Kevin. It is super fun being worked over by makeup people, especially when their instructions are to go wild and crazy. My favorite part is getting the cat ears attached. They are bright gold and held on with a band and a million hairpins.

After makeup, I wobble on my high heels over to set, which is inside an enormous mansion. It has been done up with bright lights and Chinese lanterns. There are tables everywhere, and on the tables are the brightly colored party drinks from City of Bones. Harald positions me carefully at a table with a ghoul and a banshee.

It’s already dark, and really cold, so we all get little handwarmers to hold onto. The ghoul and the banshee are big Hunger Games fans. We talk about that for a while. The crew keeps coming over to ask me questions, and so does Harald. Eventually the ghoul is like, ''Who are you?'' I explain I am the author and they seem pleased to have me since they feel this means we are likely to get more blankets and handwarmers.

There are long pauses between takes during which Kevin and Jamie have a contest regarding who can jump higher and touch the tree branches. The girls are much calmer and obviously very cold and covered in blankets since the scene requires them to be in party dresses - very short!

Lily and Godfrey have a lot of dialogue as Clary and Magnus. I sneak a picture of them in front of some cool screens. 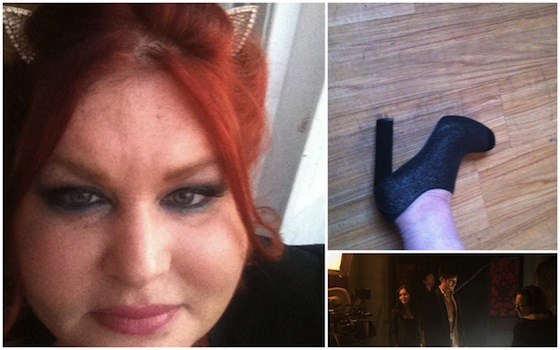 After several hours the shooting seems to have wrapped up so I am ready to go home when I find out that no, it is not over - all the scenes have to be shot again, from a different angle. We all shuffle around the tables and it is about three in the morning so I start napping on the table in between takes. Acting is hard, I observe. No one is all that sympathetic.

MTV is on set that day so everyone is doing their interviews in between the action as well. Godfrey has to do his with no pants on, but you can’t tell because he is sitting down. Now you know, though.

Finally. I am ready to go home. It is dawn, so I go grab my suitcase and head to the Toronto airport to fly home. I am unable to get the cat ears out and have to walk through the airport wearing them. I get a lot of strange looks and set off the metal detector. When the guard asks me about the ears I explain I was in a movie. ''Sure, you were,'' he says. Clearly the glamour is over!