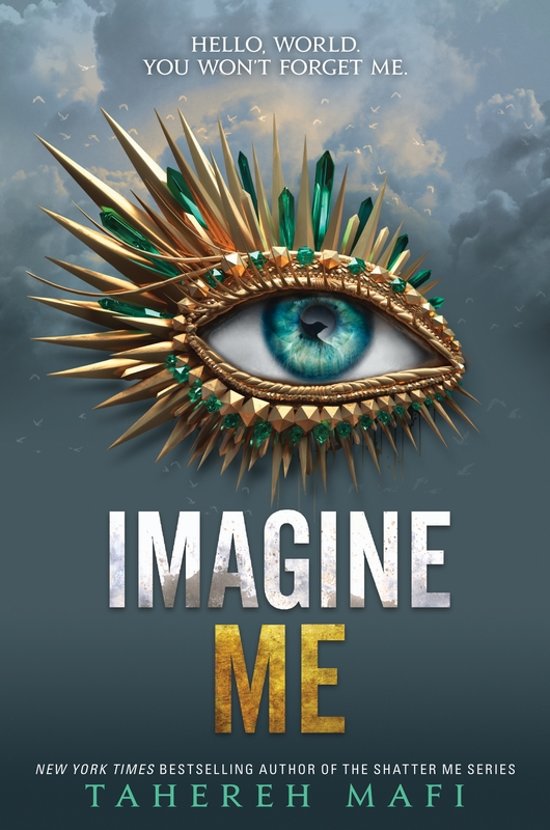 I’m still sprinting after Warner and, in a move that surprises absolutely no one, he doesn’t wait. He doesn’t even slow down. In fact, I’m pretty sure he speeds up.

I realize, as I pick up the pace, that I haven’t felt fresh air in a couple of days. I look around as I go, trying to take in the details. The sky is bluer than I’ve ever seen it. There’s no cloud in sight for miles. I don’t know if this weather is unique to the geographical location of Sector 241, or if it’s just regular climate change. Regardless, I take a deep breath.

I was getting claustrophobic in the dining hall, spending endless hours with the ill and injured. The colors of the room had begun to bleed together, all the linen and ash-colored cots and the too-bright, unnatural light. The smells were intense, too. Blood and bleach. Antiseptic. It was making my head swim. I woke up with a massive headache this morning—though, to be fair, I wake up with a massive headache almost every morning—but being outside is beginning to soothe the ache.

It’s nice out here, even if it’s a little hot in this outfit. I’m wearing a pair of old fatigues I found in my room. Sam and Nouria made sure from the start that we had everything we needed—even now, even after the battle. We have toiletries. Clean clothes.

Warner, on the other hand—

I squint at his retreating figure. I can’t believe he still hasn’t taken a shower. He’s still wearing Haider’s leather jacket, but it’s practically destroyed. His black pants are torn, his face still smudged with what I can only imagine is a combination of blood and dirt. His hair is wild. His boots are dull. And somehow—somehow—he still manages to look put together. I don’t get it.

I slow my pace when I pull up next to him, but I’m still power walking. Breathing hard. Beginning to sweat.

“Hey,” I say, pinching my shirt away from my chest, where it’s starting to stick. The weather is getting weirder; it’s suddenly sweltering. I wince upward, toward the sun.

Here, within the Sanctuary, I’ve been getting a better idea of the state of our world. News flash: The earth is still basically going to s—. The Reestablishment has just been taking advantage of the aforementioned s—, making things seem irreparably bad.

The truth, on the other hand, is that they’re only reparably bad.

“Hey,” I say again, this time clapping Warner on the shoulder. He shoves off my hand with so much enthusiasm I nearly stumble.

“Hey, where the hell are you going?” I shout, my voice ringing out. “Are you heading back to your room? Should I just meet you there?”

A couple of people turn to stare at me.

The normally busy paths are pretty empty right now because so many of us are still convalescing, but the few people lingering in the bright sun shoot me dirty looks.

“Leave him alone,” someone hisses at me. “He’s grieving.”

I roll my eyes.

“Hey—douche bag,” I shout, hoping Warner’s still close enough to hear me. “I know you love her, but so do I, and I’m—”

Warner reappears so close to my face I nearly scream. I take a sudden, terrified step backward.

I’m about to point out that he’s being dramatic, but he cuts me off.

“I didn’t say that to be dramatic. I didn’t even say it to scare you. I’m saying it out of respect for Ella, because I know she’d rather I didn’t kill you.”

I’m quiet for a full second. And then I frown.

Warner’s eyes go flinty. Electric. That scary kind of crazy. “Every single time you claim to understand even a fraction of what I’m feeling, I want to disembowel you. I want to sever your carotid artery. I want to rip out your vertebrae, one by one. You have no idea what it is to love her,” he says angrily. “You couldn’t even begin to imagine. So stop trying to understand.”

I have to literally clench my jaw to keep myself from saying what I’m really thinking right now, which is that I want to put my fist through his skull. (I actually imagine it for a moment, imagine what it’d be like to crush his head like a walnut. It’s oddly satisfying.) But then I remember that we need this asshole, and that J’s life is on the line. The fate of the world is on the line.

So I fight back my anger and try again.

“Listen,” I say, making an effort to gentle my voice. “I know what you guys have is special. I know that I can’t really understand that kind of love. I mean, hell, I know you were even thinking about proposing to her—and that must’ve—”

I can tell just by the sound of his voice that he’s not joking. And I can tell by the look on his face—the infinitesimal flash of misery in his eyes—that this is my opening. This is the data I’ve been missing. This is the source of the agony that’s been drowning him.

I scan the immediate area for eavesdroppers. Yep. Too many new members of the Warner fan club clutching their hearts.

Warner blinks, confusion temporarily clearing his anger. And then, sharply: “I’m not hungry.”

“That’s obviously bulls—.” I look him up and down. He looks good—he always looks good, the asshole—but he looks hungry. Not just the regular kind of hungry, either, but that desperate hunger that’s so hungry it doesn’t even feel like hunger anymore.

“You haven’t eaten anything in days,” I say to him. “And you know better than I do that you’ll be useless on a rescue mission if you pass out before you even get there.”

He glares at me.

“Come on, bro. You want J to come home to skin and bones? The way you’re going, she’ll take one look at you and run screaming in the opposite direction. This is not a good look. All these muscles need to eat.” I poke at his bicep. “Feed your children.”

Warner jerks away from me and takes a long, irritated breath. The sound of it almost makes me smile. Feels like old times.

Because this time, when I tell him to follow me, he doesn’t fight.